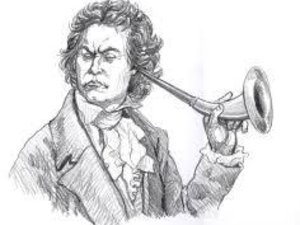 Today I was considering the realities of first performances of Beethoven’s Symphonies after getting notification of a question about that on Quora.

I would imagine that given the choice to reverse time and relive first performances of Beethoven’s symphonies would be a fairly underwhelming and disappointing experience.

I was once told that in the 19th century to find brass players one had to look in pubs, and to find string players- brothels. I’m not sure about that, but it illustrates how difficult it would have been to get a competent group together.

So the standard of playing was probably not up to much. In addition, even with good players, and Beethoven did know a couple of these, the amount of rehearsal time would have been limited by finance and other logistics.

The instruments belonging to such a motley band would also have been suspect.

As for the premiers themselves, the music of Beethoven was thought to be crass by many who were just getting used to the Classical mischievousness of Mozart and beginning to understand the intellectual games of Haydn. Beethoven’s dynamics, orchestrations, harmonies and games with established formal norms would have been upsetting or at least unappealing.

The premiere for the 5th Symphony happened at the same concert as the premier to the 6th Symphony and the 4th Piano Concerto and the Choral Fantasia. Four and a half hours. Too long. Even with no PS4 to rush home to.

That concert was reported as being “Inferior in every respect.” Many of the orchestra that Beethoven would have liked to have used and played at the theatre of the premier were booked for another gig. And the weather was freezing.

For us, one aspect of orchestral playing would appear weird – and no doubt also have resulted in a different sound: free bowing. Synchronous bowing was not important in those days, and so the observer would see a sea of string players all sawing in different directions.

It’s strange that the modern day purists don’t demand this technique in order to hear how the music really might have sounded.